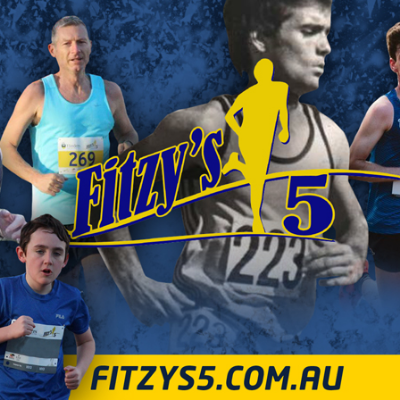 Fitzy’s 5 was created to honour the memory of David Fitzsimons. David “Fitzy” Fitzsimons was one of Australia’s leading distance runners in the 1970′s. Renowned for being able to push himself to the point of absolute exhaustion, the stories about Fitzy are as legendary as his racing feats. Fitzy won 8 Australian Championships over 5000m and 10000m, including the double on three occasions. A dual Olympian, an Olympic finalist over 10000m, a 6th placing in the 1974 Commonwealth Games and a bronze medal over 5000m at the 1977 World Cup made Dave Fitzsimons one of the greats. A proud South Australian, Fitzy had a lively sense of humour and was a devoted husband and proud father. Forever a picture of fitness, sadly, Fitzy was diagnosed with Non-Hodgkins Lymphoma. As tenacious and determined as Fitzy was, even he couldn't beat this opponent and tragically, he passed away on September 7, 2008 at the age of 58.